I was out at Crater Lake last week and took a few photos that you can look at embiggened on the social software website “Flickr”: 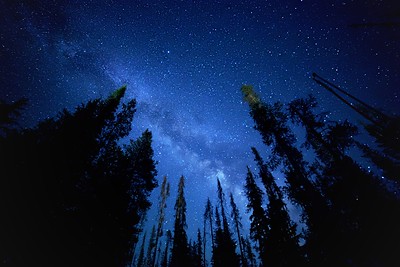 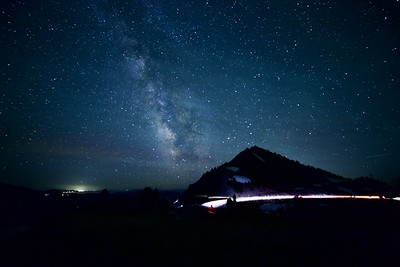 … and that’s enough of sharing photographs from my holidays. I mean, there’s a whole album of seven whole photographs if you’re into that kind of thing.

Mojang, the Microsoft subsidiary developer of Minecraft, came out with their policy on NFTs1 last week and it really stuck with me as an example of super clear, accessible writing. The policy basically says: don’t integrate NFTs with Minecraft.

One paragraph in particular really struck me. It’s about halfway down, after the post explains a) what NFTs are, and b) what the effect of the policy will be on people, and after a paragraph about recent NFT integrations with Minecraft world files and skin packs, and potential collectible NFT integration.

Each of these uses of NFTs and other blockchain technologies creates digital ownership based on scarcity and exclusion, which does not align with Minecraft values of creative inclusion and playing together. NFTs are not inclusive of all our community and create a scenario of the haves and the have-nots. The speculative pricing and investment mentality around NFTs takes the focus away from playing the game and encourages profiteering, which we think is inconsistent with the long-term joy and success of our players. (my emphasis)

Videogame developers and publishers who jumped on the NFT bandwagon over the last 2 years or so got (in my humble opinion) rightly pilloried for what Mojang have made wonderfully succinct. I was going to emphasize the good bits in the paragraph above, but it’s basically all of it, so I’ll break it down.

Each of these uses of NFTs and other blockchain technologies creates digital ownership based on scarcity and exclusion.

Correct! This is basically what NFTs enable right now.

… which does not align with Minecraft values of creative inclusion and playing together.

The difference between having hollow values and, you know, having values is to follow them through. Mojang may have taken a while, but they’ve pretty much cut through the crap by saying hey: scarcity and exclusion are pretty much in direct conflict with inclusive creativity.

If you’ve got something good to say and you want people to understand it, then say it again:

NFTs are not inclusive of all our community and create a scenario of the haves and the have-nots.

There. Even clearer. NFTs in Minecraft, from Mojang’s point of view would start introducing unwanted inequity in their players.

Here’s an example from Ubisoft of how other publishers talk about integration with NFTs, or developing NFT-like things, on Ubisoft Quartz2:

Ubisoft Quartz is a new experience for our players, built upon our vision of creating an ever-greater connection between you and the game worlds you love.

See? What’s not to love there! Connection and the game worlds you love. For the avoidance of doubt, Ubisoft Quartz Digits are

exclusive NFTs (non-fungible tokens) that represent a unique collectible and in-game cosmetic playable item. These can range from in-game vehicles to weapons through pieces of equipment.

Mojang’s policy also speaks to community: if you want a cohesive community then I’m going to assume that you want a community where goods are somewhat evenly distributed and don’t tend towards extremes, or where you actively try not to put in place policies and activities that tend toward extremes. You could argue that Minecraft has a community of haves and have-nots already, but when it comes down to it, that’s because we live in a society that already has haves and have-nots: it’s down to time and money, and it’s not really Minecraft’s job to solve that. Or it’s not really in Minecraft’s sphere of influence to do much about it. People who have more money will be able to buy more and cooler stuff in Minecraft, people who have time will be able to spend time crafting digital goods that more people want to buy. But allowing NFTs would support a further economy tied to cryptocurrencies and from there, to speculation.

Yeah, you may not want speculation and profiteering in your game designed to foster inclusive creativity…

… which we think is inconsistent with the long-term joy and success of our players.

There’s some other issues covered in the post as well, like third party NFT integrations causing a bunch of not only heartache and pain, but real monetary loss. Presumably Mojang (and therefore Microsoft) don’t want to appear on Molly White’s wonderful Web3 is going great roundup of how web3 is not going great, actually.

I thought this was a great example of a clear policy combined with a clear vision and set of values (sigh, business words) for a videogame. Or, another way of saying it might be: if inclusive creativity is important to you, then treat it as if it’s important. Would allowing NFT integartion have shown those values and goals to be important? I don’t think so.

There’s a flip side of this though that I can imagine. In any sufficiently large organization with unclear goals and strategy, you might imagine someone doing a sort of Slack-based ahem (sorry, I guess a Teams-based ahem) and pointing out that well, actually this policy is going to cost Mojang a lot of money because to follow through on it well, they will need to put in place some degree of moderation and management, because the policy, at the end of the post, in bold, is this:

blockchain technologies are not permitted to be integrated inside our Minecraft client and server applications nor may they be utilized to create NFTs associated with any in-game content, including worlds, skins, persona items, or other mods

Mojang will have to:

a) put in place consistent consequences for breach of that policy (only about a month ago, Minecraft started banning players from privately run Minecraft services3); and

b) start monitoring integrations and also have a way to respond to reports of NFT integration.

This will cost time and money to do well, and no doubt those someones will be saying well what if we don’t want to spend that time and money, we’ve got a game to ship, you’re increasing our moderation/management surface area and the answer to that is: but not doing it is in contravention of our values and our goal of creative inclusion.

The thing here is that having a policy on NFTs is something that Mojang have in their power. They can decide to do this. It’s not our of their hands. In any organization someone may say that you cannot decide to do this, but what they really mean most of the time is that doing this would cost too much. Unless, you know, doing this would be illegal, but even then glares at certain companies, what price illegality when you’re hockeysticking for the moon and beyond?

Okay, that’s it. How were you the last week?

You just read issue #501 of Things That Caught My Attention. You can also browse the full archives of this newsletter.