s12e49: Google Slides is a Feature, not an App; Choices; Here, take one of these

It’s Friday, August 12, 2022 in Portland, Oregon and it is only moderately hot today. I started writing this on Wednesday, and then didn’t finish, because life happened.

This will be the last episode for about a week, I’ll be on holiday in England next week.

Here is a picture I took of a bird on a beach: 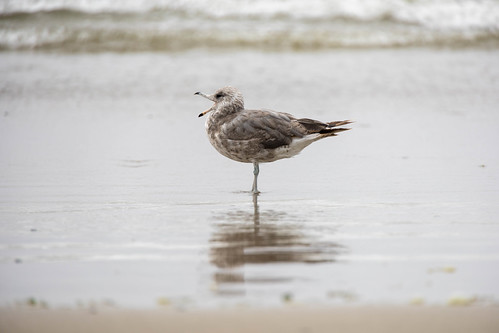 1.0 Things That Caught My Attention

Google Slides is terrible but, you know, in that Unix is terrible kind of way. It does a thing, “as a knowledge worker in the 21st century, I want to create a series of documents with text and imagery and charts so that I can communicate with my fellow knowledge workers”, and it lets you make them with other people, and then everything else it does in service of those aims is just good enough to make you hate it and appreciate the sheer skill and decision-making involved in making it just that terrible.

I apologize to all of the humans involved in making Slides and the decisions surrounding it, you are all, I assume, doing your best although perhaps you could do even better?

who is the ABSOLUTE DESTROYER who designed the Google Slides automated type sizing?
this is the most chaotic UI decision I’ve seen in some time, jesus christ 1

I have found lately that some of the work that might otherwise be done in Google Slides I am now doing in tools like Miro (the group diagramming and whiteboarding website) or Concepts (an iPad sketching/drawing app).

Miro, as a collaborative whiteboarding/sketching tool, does stuff like:

There’s all the regular stuff like grouping objects, aligning them, distributing them, giving them fills and borders and so on, you know, all the stuff that Google Slides can do because it is just minimally useful enough for you to use it, like I said, in anger.

Where it gets a bit interesting is that in principle, you can build a bunch of frames in something like Miro and then treat them as slides. You get, for free, the light-table view of all of your slides if you zoom out. You could probably link from one frame (i.e. a slide) to another, which would handle transitions. You can edit them, live, multi-user, at the same time, and you can annotate them.

All this kind of feels like Google Slides, or presentationware in general, is a feature subset, not necessarily an application in its own right. I mean, sure, a whole bunch of applications can easily be features of other applications if you want to bundle everything together. Email is a feature, so the saying goes.

But! The venn diagram in my head between “a drawing application” and “an application that lets you draw on slides” is quite a large overlap now! And it strikes me that it’d be slightly more trivial to make Miro or an application like it support slide-making, than it would be to expand Google Slides out to effectively infinite-area canvas and seeing everyone’s cursors swoosh around.

I expect someone at Miro must have thought of this already. The other great thing about this is the fantastic inroads that Miro and the other one, Mural, have made into organizations, particularly since Covid and remote work became a thing. There’s always that issue of breaking into a market, and now that Miro et. al are there, they can do the job of expansion and growing out.

I’m still thinking about QR code-linked menus for restaurant dining off the back of the previous episode.

There’s this thing I’m annoyed about, and I don’t know what the best examples are. I mean, there are examples, but I don’t know about “best”. The thing is how you do multi-item detailed comparison for something like, well, a restaurant menu on a mobile device like a phone and you’re constrained by screen size. It’s the same problem (or at least in the same domain) whether you’re looking at online ordering for a delivery service, or if you’re looking at a QR-code linked menu ordering on-site, I think.

There’s a few things I’d like that I think are baseline requirements:

Multi-user ordering: I would like for a table to be able to order together so that people don’t have to relay their orders to the mobile-device-using-order-taker.

Something like this exists in other domains like more posh karaoke places where there’s a unique link to the karaoke room. (Security is… not really existent and through obscurity, I think: anyone who has the link can visit it and edit the play queue, there’s lots of ways you could deal with this to make sure only the people in the room can edit the queue if that’s what you want).

Ideally, something super smart where items can be tagged by the person adding the item so that if the bill needs to be split by “whatever you ordered”, then that’s easier. Or, you know, you can implement it however you want. But given that you’re accepting the order and also dealing with payment electronically, it’s reasonable as the patron to expect that “if you knew what I ordered from my phone” then you should know what to charge for.

Speaking of, you don’t even need a group-editable, er, playlist, of food: you just need to be smart enough that there’s an ID for the table, and everyone just does their own order. You might want to be super smart and build in something more where you can view what’s coming to the table in aggregate if you’re the kind of party that likes to order a bunch of stuff and then share so you know you’ve got enough of each different kind of thing.

Speaking of which double, as I’ve gotten older and I’ve traded money for time and not having to make decisions, it’s increasingly likely that I’ll try to outsource my decision-making by asking my server: “what’s good” and then just letting them order for me after I’ve given them some preferences.

(The other rough rule I use is that if I can’t decide between a bunch of things that look super good, I just pick one and don’t worry about it: if they’re all good, it doesn’t matter, if they’re fantastic then I can usually come back and try the other thing. Either way, I don’t lose out)

Anyway: with disintermediated mobile ordering, you lose the chance, ish, of being able to ask for the recommendation of people who know the food really well, unless you now have the super skeezy (don’t do this) option of “asking for customer support” which is when someone comes over and talks to you and helps you decide, or decides for you. (Don’t do that, don’t call it “ask for support” and absolutely please do not do it over chat, okay? Jeez can you imagine Intercom But For The Restaurant You’re At)

If you wanted to be suspiciously shitty about it, I suppose (and I am rabbit holing here) if you captured the market and were, say, Square or Tock (probably not Tock) or whoever’s winning at dining service POS systems, then you’d track user orders over time and then make some shit up like “based on the menu and your previous orders, we recommend…” and you know what, I bet it wouldn’t be worth it but somebody somewhere is going to talk about engagement and lifetime value and opportunities for upselling and you just made me throw up in my mouth a little bit even though restaurants love upselling, which is what, in the worst cases, Liberal Jordan Peterson author Malcolm Gladwell likes to remind us about.

I digress. I was talking about ordering. I don’t know how you might go about improving “make it easy to compare many options on a small screen”. Are there lots of items on a menu? If there are lots, and lots of sub-groups, then you’re talking about related pairings. If there are, like, seven different options for onion rings, then… how do you do that? If there are thirteen different apps and then twenty different entrées, how do you do it? The ridiculously and embarrassingly talented Lucas Pope is still in my head, rent free, partly because he wrote about porting Papers, Please to mobile phones, which required redesigning for screen size to support the feel and more of the game’s mechanic. (It’s in my head because part of the deal is that you have to look at a bunch of documents, Pope thought he had to preserve the ability to arrange documents so you could see a lot at the same time, then he realized the actual priority was readability, leading to a carousel method instead of a desk).

Now, if I were to act a bit more like stupendously talented Lucas Pope and try to think a little bit more sideways, I might consider: well look, if the problem is fitting everything on to a small screen then why bother? Why not just throw away most of the food and most of the choice, and start a restaurant or whatever with a menu optimized for a mobile phone-sized screen! Doing that would be worth at least three hand-wringing articles in The Atlantic, The New Yorker and The New York Times, and then maybe a breathless one in Wired about how restaurants with menus defined by screen size and resolution are the harbingers of a techno-utopian revolution in the triumvirate of hospitality, entertainment, and digital transcendence.

Are there any doctors who’ve gone that bit step further than saying “Maybe you’re online too much? Maybe be online a bit less?”. Going further than just suggesting “better sleep hygiene habits” might include “I’m prescribing you this raspberry pi-hole, you can pick it up at Best Buy, use it for a month and then let’s schedule a follow-up” and there you go, you’re not allowed (without some ingenuity, I suppose) to look at Twitter after 6pm or whenever it starts to get dark. This is what I like to feel my individual style of “ha, made you think” and yet also “no way, can you imagine the FDA trying to figure out how to regulate a hardware device that’s in the realm of mental health but what it does is either dumb DNS blocking all the way up to deep packet inspection” or even “what’s the shit U.S. health insurer-approved version of this” or past that, to “which Y Combinator startup is going to develop and market prescription-friendly, insurer billing approved subscription hardware and software for content mangement for mental health” and the answer is of course, “a bunch of them are doing it already, Dan”.

Okay, that’s it for now. I’ll be back on the 22nd of August, unless for some reason I’m back before then.

You just read issue #504 of Things That Caught My Attention. You can also browse the full archives of this newsletter.