s12e51: I Am Reasonably Jet Lagged

It’s Thursday, September 15 2022 and I am back in Portland, Oregon after a month visiting family and friends in the U.K. As far as I can tell, after wearing masks as much as possible, none of us got COVID. So that’s a win.

I clearly thought I would get more work and writing done while away than I did.

Here is a photograph I took of some young people taking a photograph of a TfL outdoor display announcing the death of Queen Elizabeth II the night it was announced, on 8 September 2022: 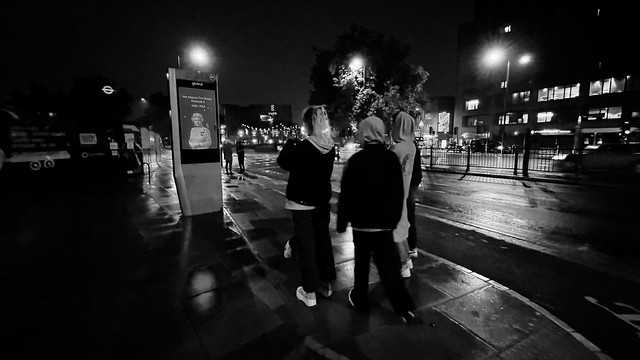 I will try to keep this one short, hoping with optimism that you have been taking this time to catch up on all the unread episodes.

Remember that film, Enemy of the State? Eyes In The Sky: The Secret Rise of Gorgon Stare and How It Will Watch Us All is the story of how it inspired the tech for gigapixel realtime aerial surveillance. Caught my attention because: it’s an an alternate Hey Look What A Film Inspired That Isn’t Minority Report that isn’t your tired, stereotypical Design Fiction of Tom Cruise.

It is left for the reader as to whether the CIA is responsible more for the development of Oracle-the-database or whether we’re talking more about Oracle-the-commercial-licensing-model. I know which I think is more evil. I think.

Via jwz, you can solve mazes using spring kinematics, which as is pointed out isn’t a terribly efficient way of doing things if you have computers because you can always use A*, but caught my attention because: hey here’s how “physics” and “nature” “solves problems”, probably one for a bunch of people who talk about how amazing slime mold is to file away for next time they talk about how amazing slime mold is.

I had a chat with someone who reminded me about Undercurrent’s Skills Maturity Matrix. Undercurrent doesn’t exist anymore, and also I had some beef with their founder that I wrote up in a newsletter that I can’t be bothered looking for. But! This skills matrix is pretty good at describing some of the things that strategists do, although it doesn’t go quite the full way in explaining why strategists are useful. (Strategists are useful, but I would say this, because I, a strategist, wrote this).

Here’s a bit of code that gives you audible feedback on how much your browsing sends packets to Google and it is probably worse than you expect, even if you expect it to be not-great. Caught my attention because: you know, that thing about converting to the sensible human sensorium all the stuff that’s happening that is invisible to us. If you want to understand the world, then also figure out how to see the world.

How are you doing? I am reasonably jet lagged.

You just read issue #506 of Things That Caught My Attention. You can also browse the full archives of this newsletter.