I know this because I am looking at the seatback monitor running a Flightpath 3D linux application which apparently is “enjoyed by 375 million passengers”. Citation needed for the enjoyed part, of course.

Anyway, now I am distracted because I am looking at Flightpath 3D’s website and their product overview sheet is gated by an email address requirement. I would normally make fun of this (“I want a map for my aircraft”) but then there are options like “You have great content to integrate with our map” and I’m like, okay, that’s reasonable, and I suppose I would have to check the last box of “Some other reason” and write in “I love learning new things and this is one of the ways I’m obsessive about learning about how and where people use software”.

Also because I have notes on Delta’s implementation of Flightpath 3D’s application and its latency and, you know, the whole seatback entertainment system software/hardware ecosystem. Because I’m me.

Here is a photograph of the first Halloween pumpkin I carved, which is very On Brand: 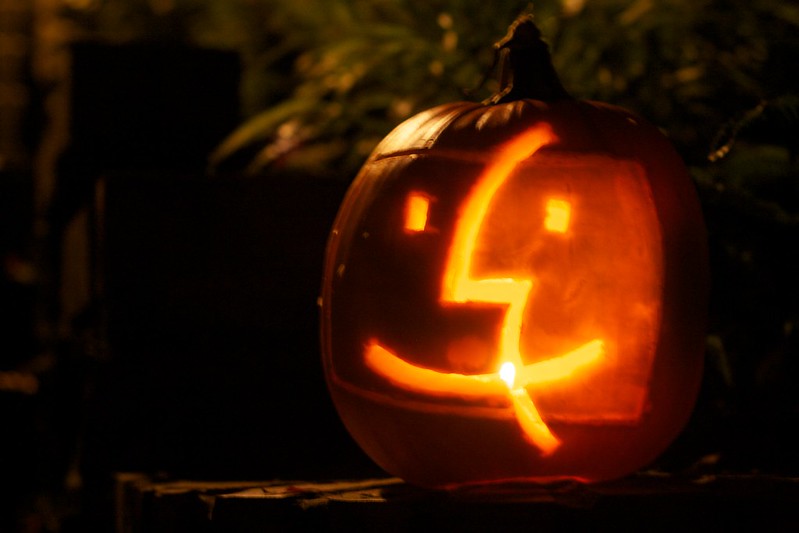 Sorry, I had to do it

Look, the dynamic island1 is interesting because I was about to make the (admittedly privileged) decision to upgrade from an iPhone 12 Mini to an iPhone 14… until I saw this new user interface that’s one of those typically Apple melds of hardware-with-software-to-make-something-new.

So now I’m in the position of deciding to spend a bunch of money on a different phone than what I was planning to get purely because it has an exclusive UI feature. This is, on one level, ridiculous, and on another level, exciting because oooh look, new thing to play with.

I don’t care about the cameras, I don’t care that it’s got the next processor, I care only a little that a bigger phone than my Mini probably means battery life will be better. What I care more about is understanding what’s happening with this new notification/interaction pattern, and it’s super weird that it’s because of how Apple’s decided to deal with the hardware of two punch-outs in an OLED display.

Getting to the point

I have been in meetings where someone will try to be polite, or try to be helpful and the behavior is as if they’re avoiding saying something painful to their audience. Here’s an example:

I mean, at this point, I would cut out a whole bunch of politeness and instead substitute candor because with candor will come clarity. There is a lot implied in my imagined above conversation, which means there’s a lot left outside of a shared understanding. You could get a lot of wiggle room in there, and again, it’s because people don’t want to start bringing difficult or hard concepts into the room.

But what it all boils down to, even more, is this:

We’ve flipped it, then, from “hey, there’s this thing you should look into, it looks pretty cool” into “you are going to need to switch things”. Nobody wants (I think?) to have to switch things (modulo those things being better? easier? faster? cheaper?), especially if I assume that you’re in the middle of delivering a whole bunch of valuable software yadda yadda and you hadn’t really accounted for “hey, we’re swapping rugs, you’re gonna need a rug migration strategy that’s more complicated than “hey everyone can you lift up your legs for a bit while I hoover under here?”

Anyway, my point is if you assume that everyone is smart, you can probably improve clarity, reduce the risk of understanding and generally help move things along by saying the thing out loud so you can move on from it, rather than trying to do some sort of praise/shit sandwich.

Here is a thing I noticed: if, say, you are in the position where you need someone to trust you more, and the thing that you think you need that will actually help with that trust is them giving you the space to do what it is you need to do to produce the thing that will help them trust you, then what is it exactly that you’re asking for?

E.g. if you’re saying “I need a bit of time and space so that I can go make the changes we just talked about” then… what would that look like? Is it fewer reports? Fewer meetings? Is it “leave me the fuck alone and just let me pop back in after period x has passed and I’ll just leave the proof on your desk as a present?”

The thing I noticed is that if there are specific things along the way of your period x that would be helpful (i.e. get these specific people off my back; I am waiting for something from someone who is critical but they’re behaving as if they’re not critical and just not showing up, I need them to show up) then:

Or, you know, you’re in a horrible terrible no good working relationship and you’re fucked. That’s a whole different problem.

Manifest What I Mean, Not What I Say

Here is a quick chain of thoughts:

I, of course, am easily distracted and go sideways, so one of the reactions I get is wondering what the industry standard benchmarks might be to assess the performance of weakly godlike AI/ML systems, e.g.:

distGEnIE-3 achieved a new state-of-the-art 9.45 on the MWIMNWIS2022 (Manifest What I Mean, Not What I Say) zero-shot benchmark, compared to WiSH-R, the previous best-performing model.
(the inevitable tweet)

This is funny/silly to me (let me spoil the joke by explaining it dead) because:

Anyway of course The Wirecutter would then be forced to produce a guide along the lines of The Best Weakly Godlike AI Systems To Subscribe To For Most People lest the NYT get cut off from that sweet recurring subscription affiliate revenue.

You just read issue #509 of Things That Caught My Attention. You can also browse the full archives of this newsletter.